It is possible that this concert was recorded by David Scott in 1976.  There is some uncertainty over this. It did take place in what was the games room of the Metropole Hotel where POCS held their meetings. 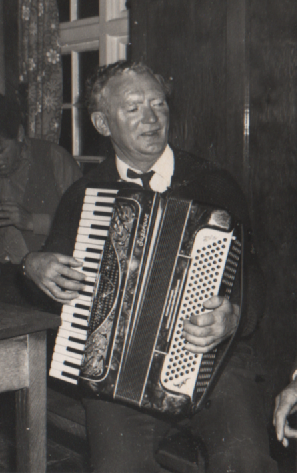 There is no uncertainty over the performance by Charlie Bate, and this is probably the only recording made of this number of songs and tunes at any one time by this much loved local singer and musician.  May Day was at the root of his love for his music. Through it he made many friends throughout the country. He was invited to perform at several concerts and on Radio

1. Padstow May Song -The first track comes not from this performance but from a recording made at some other time possibly for a broadcast.  It is the Padstow May song, with some explanation, sung solos by Charlie. . 2. Old Grey Duck – Charlie may have already known this song when Brenda Wooton made it popular. They both shared a love of music and Cornwall and were proud to belong.  To be ‘one o we’.

3.  How Pleasant and Delightful – At one time after the May song the best known in Padstow with versions known all over the country.  One that Charlie would have grown up with and sung by him in 1965 at a concert in The Royal Festival Hall. An LP was produced by HMV entitled “Folk Sound of Britain”.  The EP (remember those ?) contained “The Sweet Nightingale” sung by Charlie, another Cornish favourite.

4.  Lamorna – Another song made popular by Brenda.  A staple of any Cornish sing along.

5.  Little Brown Jug – variations on a theme.  A typical Charlie party piece exploring his gift of improvisation and self taught skills on the accordion.  A Waltz is followed by a Polka, a March by the Twist (very up to date at that time !!) followed by a Tango,a Fair Organ and ending in church with a Hymn.

6.  Maggie May  - Another Cornish staple.  Personalised, on this evening, for Margaret Brenton who was in the audience.  Simply and sincerely sung as only Charlie can.

8.  Egloshayle Ringers  - A song from that ‘place up river.  A lovely old chorus song beautifully sung.  There are several similar variants of this song.

9.  The Bells – More Accordion virtuosity from his nimble fingers.

13. Cadgwith Anthem – Today firmly out there in Male Voice Choir circles it was little known outside Cadgwith until Jim Bailey started singing it around the numerous Cornish Folk Clubs in the 60’s.

14.  Jigs – The Mucking of Geordies Bier and The Bugle Horn -  Good foot tapping stuff here, picked up no doubt by contact with  other country musicians like his good friend Bob Cann from Dartmoor.

15.  The Oyster Girl – From the singing of Harry Lightfoot of Wadebridge.

17. The Sweet Nightingale – Much loved Cornish song – sung wherever there were Cornishmen in 19c.

19. The Old Pigskin Pianna – With the aid of a matchstick to create the drone, Charlie turns his accordion into bagpipes.  Another party piece from a natural entertainer.

20. Alpine Echos -   The fading on this track is on the original recording.

21. Cuckoo Waltz – In European countries, tunes like these last two are still played outside open air cafes.  No surprise to find Charlie enjoying this kind of tune.

22. Post Horn Gallop – The concert ends on a high note with a tune that needs no explanation. “Tallyho”

Thanks to Chris Blount of Chough Digital who tidied up the original tape and transferred to CD.

CHARLIE BATE  - a profile Charlie was born in Padstow in 1919.  His father also Charlie was a merchant seaman who served on several vessels including the Padstow registered ‘VIOLA’ a ‘Q’ ship in WW1.  Charlie was still at school when his mother died and he was sent to live with relatives in St Merryn. He was separated from his sister Cissie who returned to live in Padstow later on.  During WW2 he served for just over 3 years in the Royal Engineers returning home to a job at St Merryn Camp. He married May who he met when she was a Land Army Girl in the district. They had one son Alan.

Like his father before him Charlie played music and was a member of the Old Oss band on May Day.  Young Charlie proved to be quick to pick up any tune by ear and it was not long before he was getting a reputation as a singer of songs.  In those days there were concerts to go to and frequent impromptu pub music sessions to feed the imagination of his natural talent.

He was a natural to front a 1953 film made on May Day that remains a unique record.  After this (or more likely before as he seems to have been the “link” man with Peter Kennedy and Alan Lomax) he was taken under the wing of the EFDS representing the South West in concerts and on Radio often with his good friend Bob Cann from Dartmoor.

From 1953 – 56 he supplied the music for Square and Community Dancing residential courses run by the Cornwall Youth service under Mr Alan Foxworthy and Mrs Hannah.  He was also part of a Square Dance Band called the Padstow Melody Makers.

Charlie worked for a time at the Waterbeach Hotel, all the time making new friends and playing his music in the evenings in the local pubs.

I first came to hear him in one of his haunts.  It would have been either the Cornish Arms at St Merryn or the Ring O Bells St Issey.  Charlies ‘Old Oss’ mate Mervyn Vincent was often behind the organisation of these happenings for this was the mid 60’s and what was called ‘The Folk Revival’ was in full swing.  People from all over the place were coming down not only to see ‘May Day’ but to hear Charlie Bate in person. Some of us got to learn some of these ‘folk songs’ along with the old favourites and were encouraged to join in.  Happy days.

The Wadebridge Folk Festival grew out of this enthusiasm for folk music. Here and elsewhere.  Charlie would appear on several occasions but he was not so keen on these more formal appearances.  After Charlies death in 1977 at St Issey aged 58 they instituted a ‘Charlie Bate Award’ for services to local Folk Music.  It appears to have lapsed in recent years. (The Cornwall Folk Festival was cancelled for the first time this year 2007)

Eyes still light up when you mention his name.  Those of us who shared some of those musical moments do tend to view them as through a glass brightly.  Were they ever as special as our memories would have us believe.

Charlie can also be heard on :

Track 9: The Padstow May Song Folk Sound of Britain HMV 7EG 8911 - Side 2 The Sweet Nightingale

Folktrax -215 – May Day – from the soundtrack of the 1951 Film made by Peter Kennedy, Alan Lomax and George Pickow.

Maggie May, Cadgwith Anthem and How pleasant and delightful can also be heard sung by Tommy Morrissey and Charlie Pitman on ‘Pass around the Grog’ veteran VT122.

John Buckingham wrote this, any errors and opinions are his.