On May Day in Padstow in the the 1840's the practice of smearing bystanders with soot or lampblack formed part of the ritual along with the firing of pistols to start the proceedings. This face blacking forms an interesting link with the "Darkie" tradition now called “Mummers” that takes place on Boxing Day and New Year’s Day.

One could say that the May Day tradition has given Padstow an advantage over many communities in that a special awareness of this unique day makes other less high profile customs no less important to keep up. This is true of the Carols sung in December and the Boxing Day and New Year’s Day "Mumming" celebrations.

The drums and accordions are there as on May 1st but the numbers are relatively small and the dress echoes the minstrel groups that were such a big part of the popular music culture for over a century. The music repertoire also reflects this era – fragments of once popular songs strung together performed with noisy enthusiasm. It is perhaps just as well that some of the words pass unnoticed. Where else but in Padstow would the fate of "poor old Ned" who's "gone where the good n……..s go" be mourned with such feeling. Stephen Foster wrote this song and any suggestion that slaves may have sung it on the quayside of Padstow is unfortunate baseless conjecture.

It is worth noting that the concept of "black face" had been around in Europe long before white Americans started mimicking black entertainers. Mummers and Morris Dancers blackened their faces to avoid recognition and to assume an 'other' identity. On this basis we can readily assume that the arrival of the "minstrel" idea in Padstow replaced an earlier mumming tradition that is known to exist.

It is claimed that visits to Capetown S. A. by minstrel groups inspired the formation of the 'Coon Carnival', also known as the 'Minstrel Carnival' which still takes place, post Apartheid, on New Years Day among the Cape Coloured community of that city. Old customs of the people, performed by the people, adapting to an every changing world."

More recently (Feb 2016) BBC Radio 4 under the title ‘The Unknown’ shared the experience of black film maker Michael Chapman who visited Padstow to find out what this was all about.  He reports on what he saw. Ladies with black faces wearing turbans and ear rings ‘Mammy style’ and, yes they heard the N word sung . “There was a reluctance to talk to us” he said. Not surprising, given the media storm that came some years ago when the London Press got hold of the story. When I was growing up ‘Polly Wolly Doodle’ was one of those songs I learned.  It was in numerous song books at the time. It is still popular elsewhere today, as a children’s song without a ‘N’ word in sight. I will attempt to put down the song or more accurately ‘fragments’ of songs as I understand them. I have not included ‘Abe my boy’ or listed any of the numerous tunes used by the musicians as they parade the town. I’ve just come out before you to sing you a darkie song I’ll play it on my old banjo and call it Lucy Lander. Bung id a derri, bung id a derri, bung id a derri under, There you’ll see the old grey goose. Smiling at the gander. Old mother Flipper Flopper jumped out of bed. Opened the window and popped out her head. John, John the grey goose has gone and the fox is off to his den o. Den o, den o.  For he had many miles to travel that night before he reached the town o. On a cold and frosty morning, me Uncle Neddie died, And he died many years ago, He had no woolly on the toppie of his head, In the place where the woolly ought to grow, Up with the shovel and a he hi o, Down with fiddle and the bow, Theres no more work for the poor old man, He’s gone where the good ‘n……s go. I tied my oss to a cabbage stump, He winced and he kicked and he broke his rump, I saw a doctor passing by, He said your oss will surely die, If he die I’ll tan his skin, If he lives I’ll ride him again, Ee Eye Oh come along me darling. Miss Lucy had a baby, she dressed it all In green, She put it in a bandbox, and sent it to the queen,. The queen did not like it because it was too fat, She put it in a bandbox and sent it to the cat, Oh the Cat did not like it because it was too thin, she put it in a bandbox and sent it back again.

Sung as one, it starts with some of ‘The Fox’ followed by Stephen Foster’s ‘Uncle Ned’ . Then to the odd tale of the ‘oss’ that may live or die ? Ending with ‘Miss Lucy had a baby’ a version of a skipping rhyme. Be surprised or even amazed at these survivals.  There is no intent to offend. Take it for what it is. Even this piece is just one local man’s attempt to explain this curious local tradition. Not an easy task. 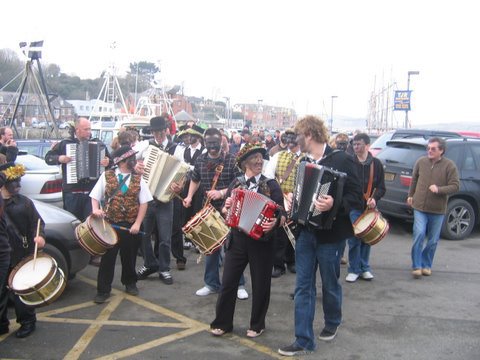 Modern day Mummers by harbour side. 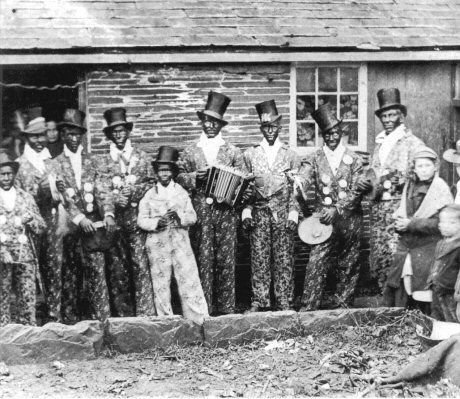 Group of original Mummers circa 1920s