Topical pictures as they relate to the Memorial Hall previously the Fisherman’s Mission. 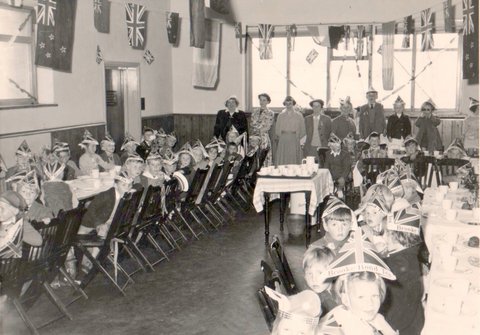 The first one is of what we think is a Coronation Tea Party - photo taken by John Pearson.

The second is taken from an old postcard and shows the workshop and sail loft that existed on the site before 1937 when the Mission Hall was built.

The RNMDSF pulled out in the late 1940’s with the decline in fishing activity and the building was purchased by a committee that had been raising funds to build a Memorial Hall. Many in the town thought this was not a good idea as no one seemed to want to use it. After a few years remaining empty a situation arose when the local Catholic Priest Father Wyatt formed a successful Youth Club running in the Legion Hut. They moved across in the late 50’s. After Seamanship Classes had proved popular Frank Sluman and others set up the Sea Cadets who took over the building in 1960. The Padstow Echo of May 1983 announced that the Memorial Hall would in future be available for hire by community groups and that Age Concern would be running a pop in centre on three days a week from 10 o'clock to 1 pm. The Sea Cadets had decided to build their own building on land leased from the Town Council. Fundraising began with a legacy from a Miss Bridge. A new committee was formed in 1991 headed by Mervyn Stewart and Malcolm McCarthy. They have run the hall letting out principally to Art Groups and a regular commercial Flea Market. With Mervyn’s move.

Out of Padstow a meeting was held on Monday 21st Jan to form a new committee to take on the running of the Hall. A new era has begun. There were many at the meeting anxious to see this valuable community asset taken care of. For the last 5 years has been run very successfully, supporting the local community art groups, fund raising and the fishermen.

This hall was used during both World Wars as a recovery point when the destroyer HMS Warwick was sunk off Trevose Head.