There have been lifeboats stationed at Padstow since 1823. The first being ‘The Mariner’s Friend’. Not much is known about it but it was believed to be a six-oared boat similar to a Cornish pilot gig. It was based at the lifeboat station at Hawker's Cove. The Mariner's Friend was replaced in 1856 by "Albert Edward" which itself was replaced in 1864 by "Albert Edward II".  Not much is known of these two boats other than records of a disaster on 6 February 1867. While attempting to rescue the Georgiana five of the lifeboat crew drowned when the lifeboat capsized: Daniel Shea, William Intross, Thomas Varco, Andrew Truscott and Michael Crennel. A memorial to the men who died can be seen in St. Petroc's church, Padstow. In 1883 "the Arab" joined the fleet. 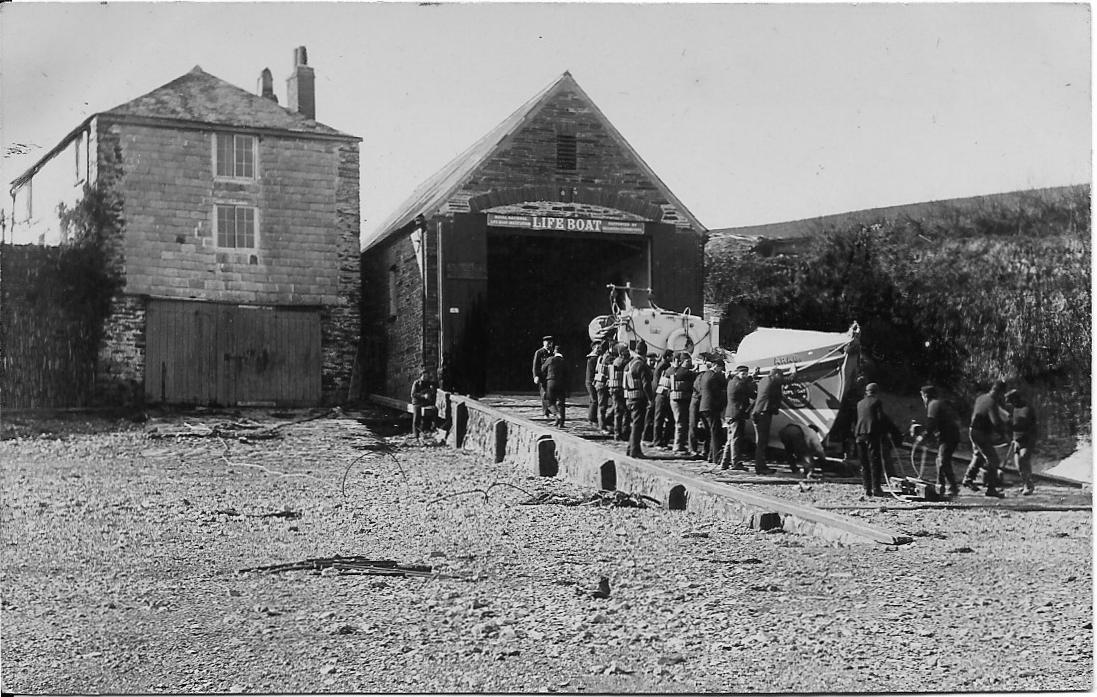 In the photo below the crew of the “Arab ”seen standing in front of their lifeboat at Hawker's cove.  Coxswain, David Grubb, is the tall man on the far left. 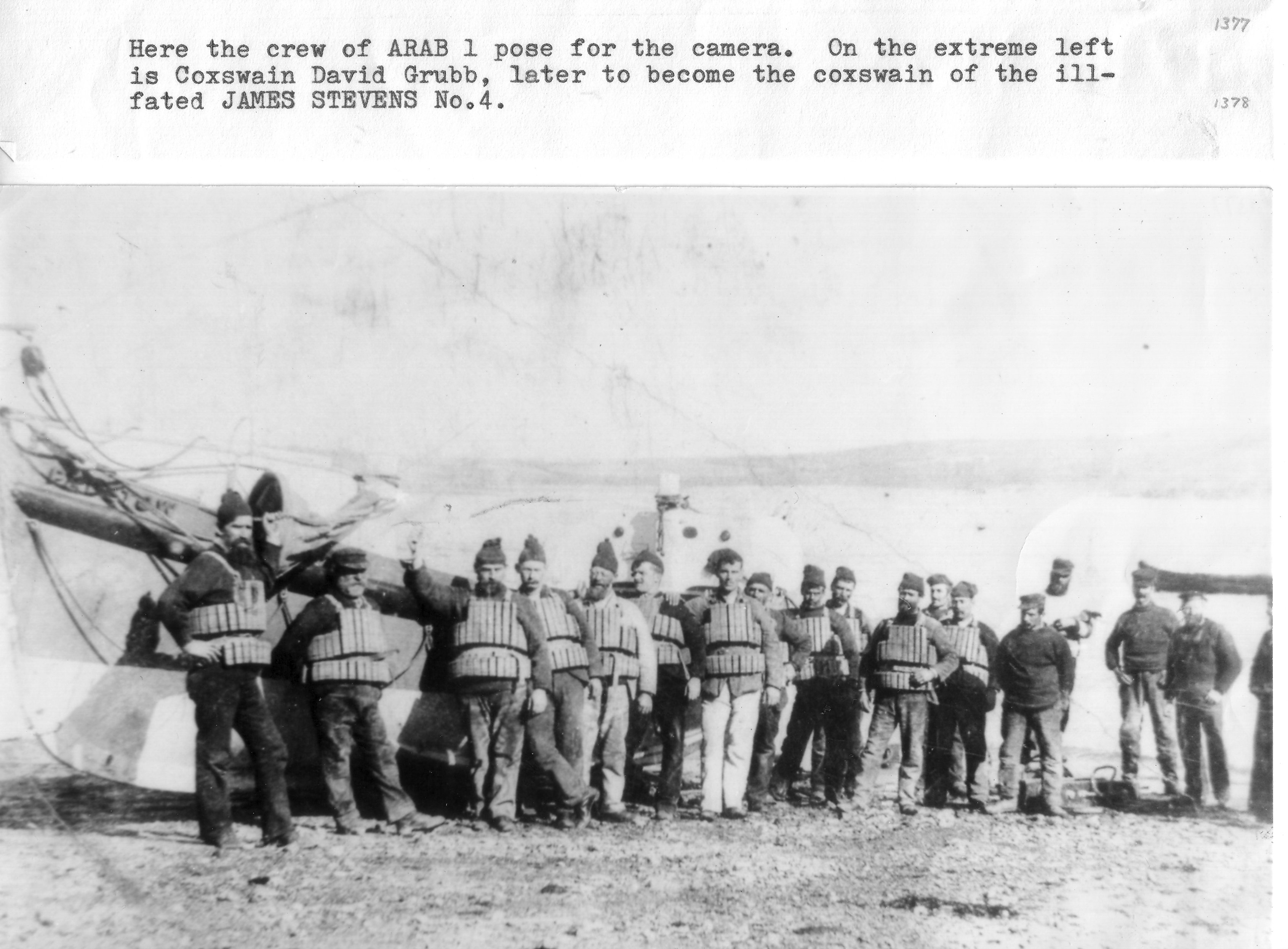 Each man wears the traditional cork life jacket; these became regulation issue for the RNLI in 1874, and were used until the introduction of the Kapok filled type, eventually superseded by the automatic inflation jacket used today.

On 11 April 1900 the Arab was lost while attempting to rescue the "Peace and Plenty" from Greenaway rocks.  The new steam class lifeboat "James Stevens No4" which had joined Padstow in 1899, and was kept on a mooring in the river, was launched to help. It was hit by a large wave and capsized.  Eight of her crew of eleven were drowned: Coxswain David Grubb, John W. Bate, James Grubb, E Kane, JS Martin, JB Old, J Stephens and S East. A memorial to these brave men can be seen in Padstow Cemetery. A model of a sister lifeboat of the James Stevens can be seen in the museum. 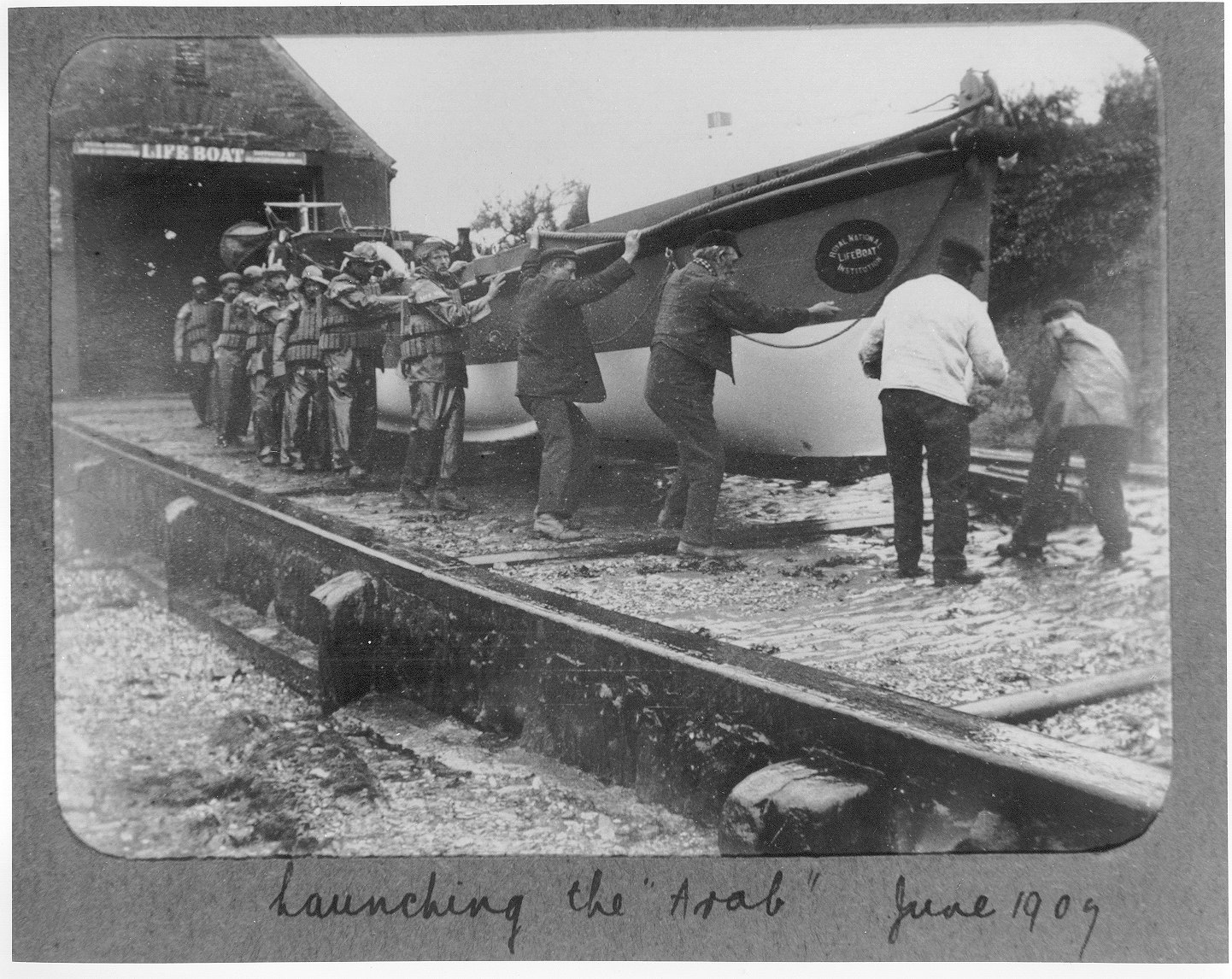 The "Arab" was replaced in 1900 by "The Arab II" which was a 36 foot 10 oared boat. It served Padstow for 31 years before being replaced by the 35ft 6in self righting motor-class  "James and Sarah Eliza Stych".  In 1901 The James Stevens was replaced by the "Edmund Harvey" 42 ft self-righter (12 oared boat) and steam tug "Helen Peele". These were both moored in the river and remained in Padstow until 1929. 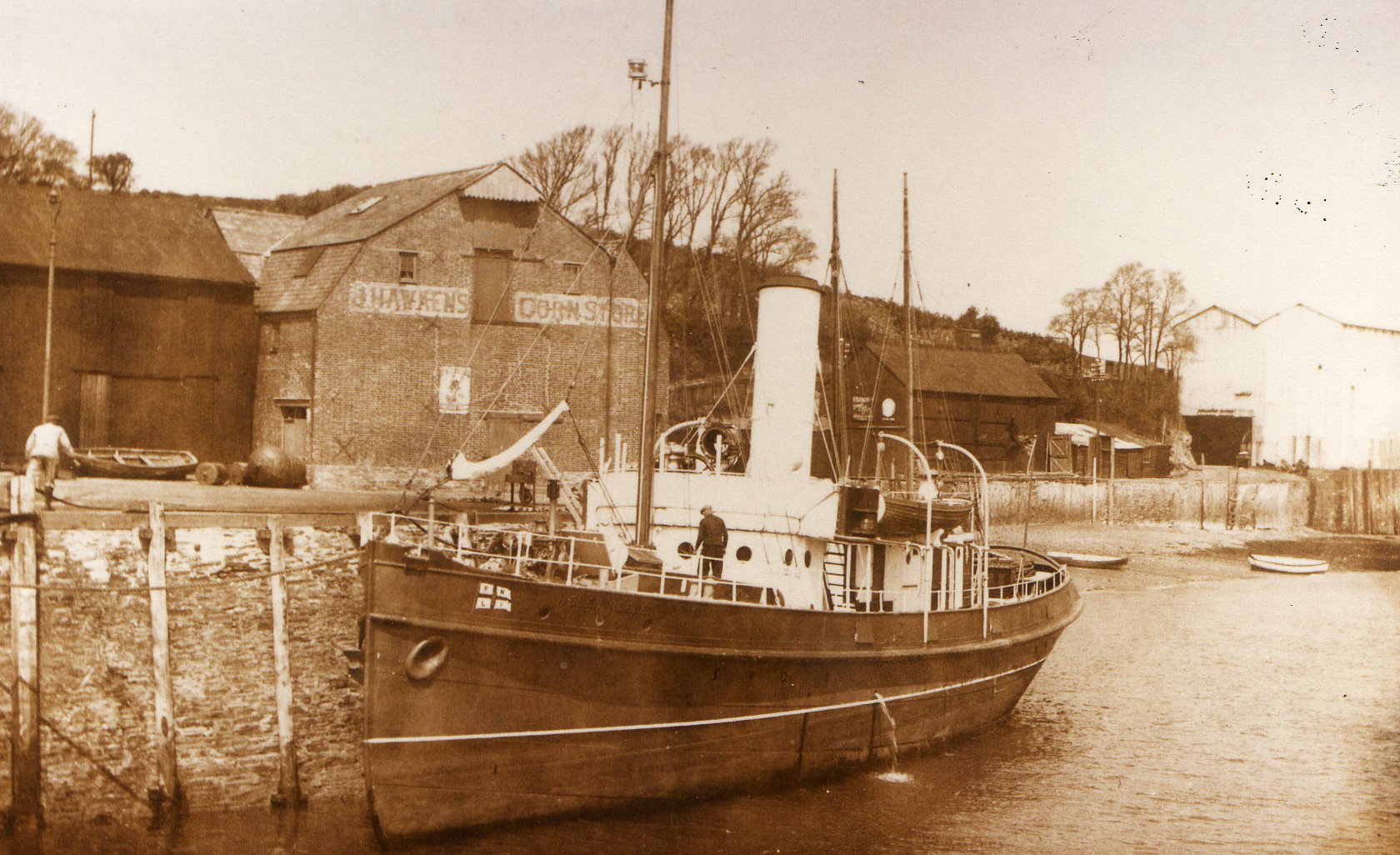 The Helen Peele ran aground at Greenaway rocks in 1929. Her funnel can still be seen on the rocks at low tide. Her bell now has pride of place in TS St Petroc, Padstow's Sea Cadet unit. 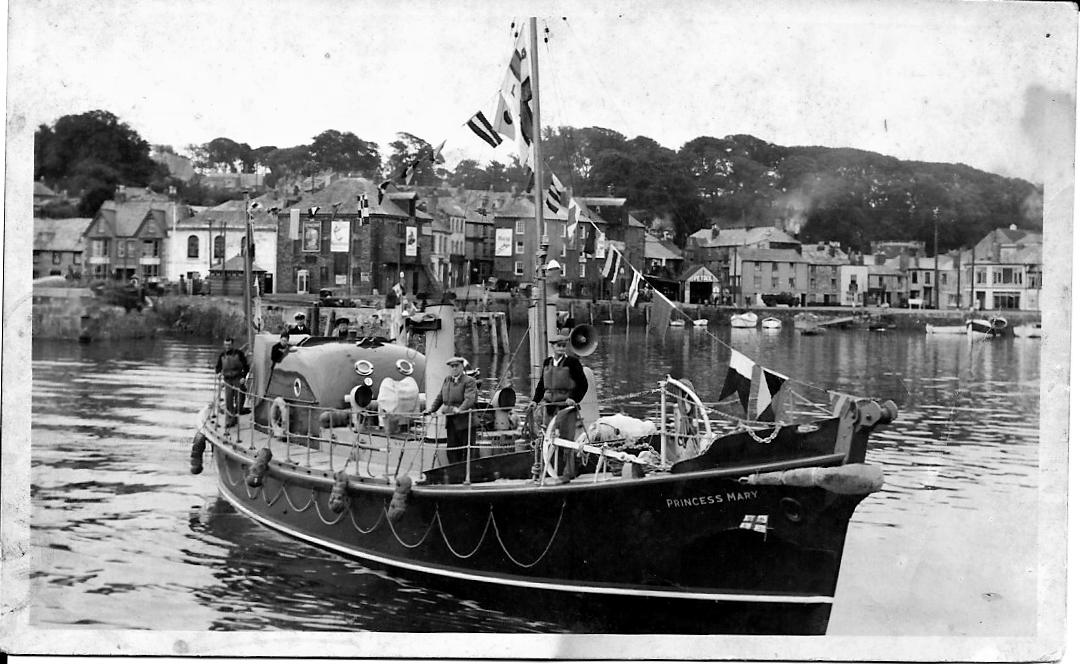 In 1929 the Edmund Harvey and Helen Peele were replaced by the Princess Mary" a 61ft Barnett-class lifeboat. She served Padstow until 1952. 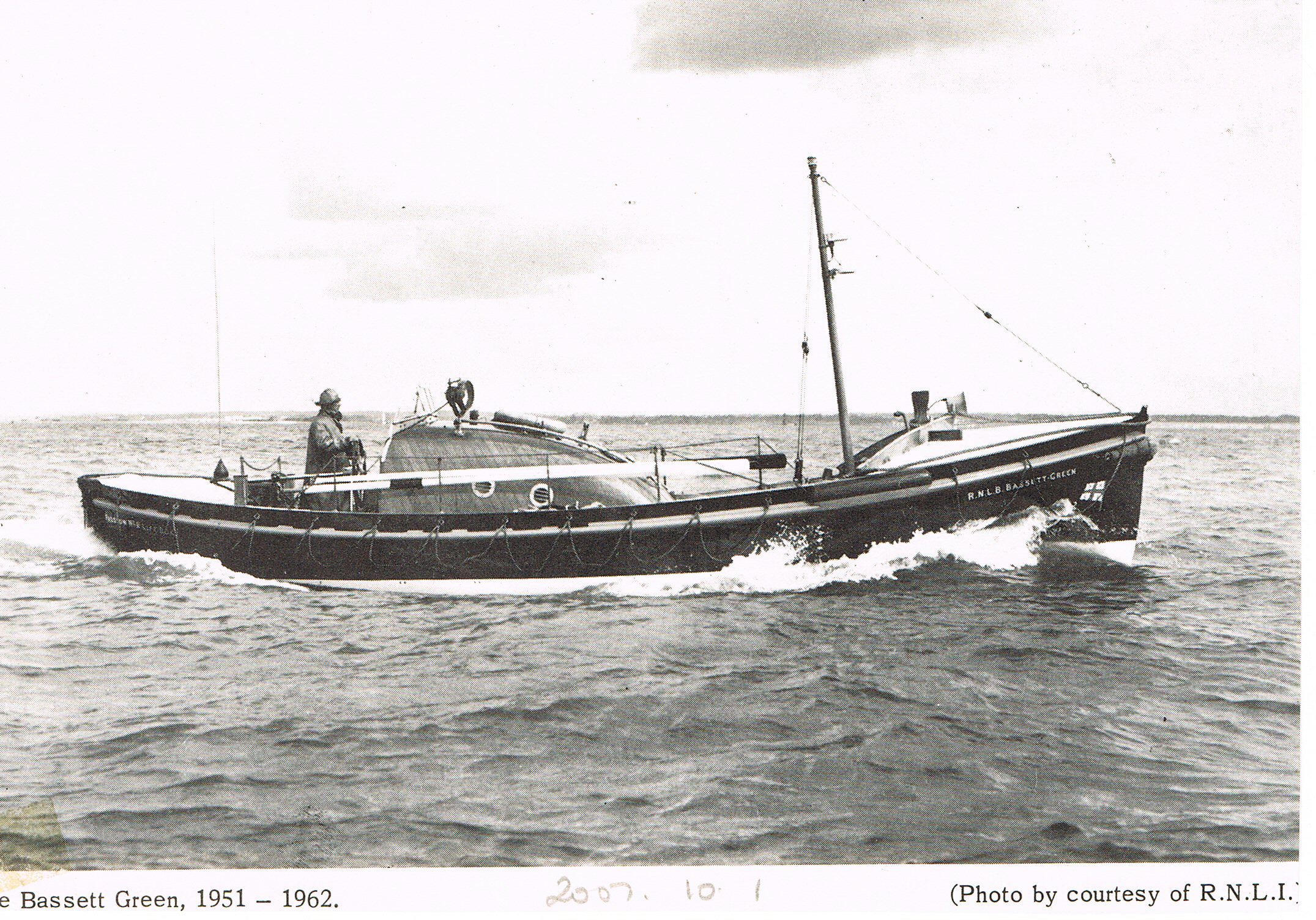 From 1947-1951 Padstow was served by "Stanhope Smart" a 35ft 6in self righting boat similar in appearance to the JHW and James and Sarah Eliza Stych.

From 1951-1962 the Liverpool class twin engined "Bassett Green" was based in Padstow. 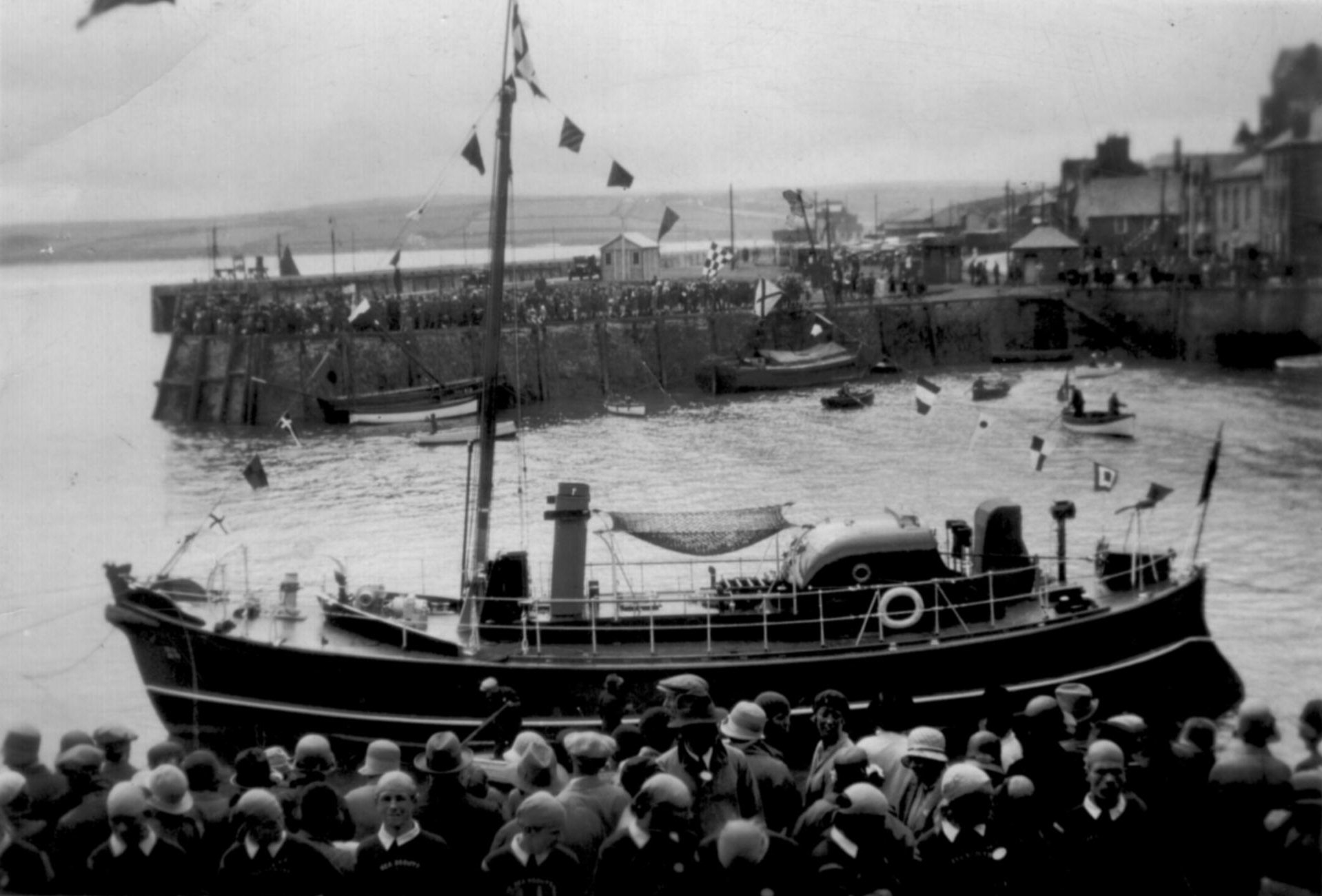 In 1952 the 52 ft Barnett class lifeboat "Joseph Hiram Chadwick" joined Padstow. It remained in Padstow until 1967.

In 1962 the Hawker's Cove lifeboat station was decommissioned and a new station built at Trevose Head. The old lifeboat house is now a holiday home in private ownership. 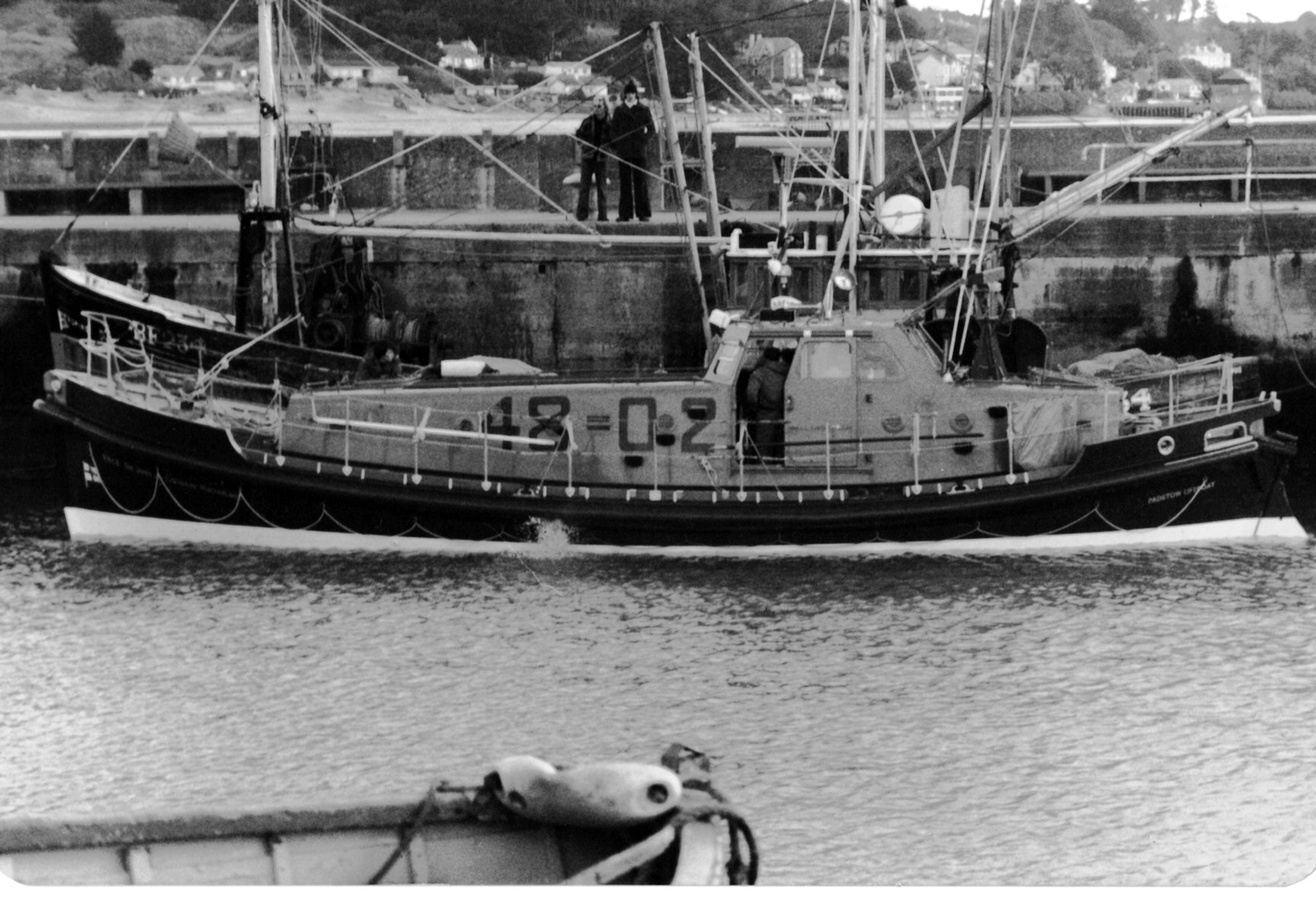 In 1967 the James & Catherine MacFarlane joined Padstow and was housed in the new station. She was a 48ft 6in Oakley class lifeboat. She performed many rescues, the most notable being rescuing boats from the fastnet race in 1979 and the rescuing of the Calcutta Princess in 1977 for which Coxswain Tony Warnock and 2nd Coxswain Trevor  England were awarded silver medals and the crew received vellums.

Two vessels covered Padstow after the James and Catherine Macfarlane was retired from Padstow in 1983 to become a tourist attraction at Land's End. These were the Guy & Clare Hunter (1983-1984) and The Duke of Cornwall (1984). 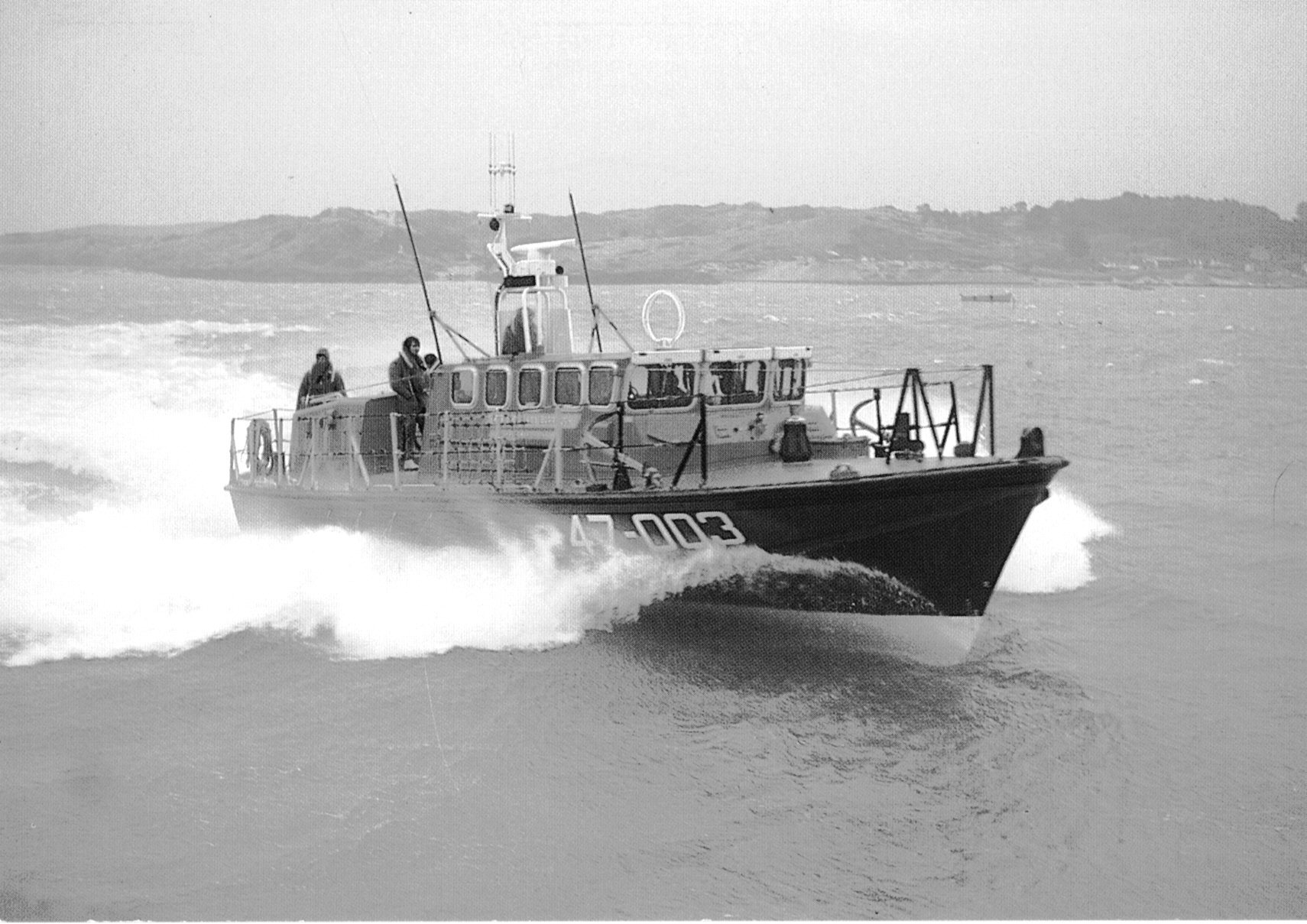 In 1984 Mickey Allen, heiress of the Beefeater gin family, purchased Padstow a brand new Tyne class lifeboat "James Burrough". She also purchased a new lifeboat landrover for the crew to get to the lifeboat station.

Mickey Allen died in 2005 leaving £9 million to the RNLI from which James Burrough's replacement was purchased. The Tamar class "Spirit of Padstow" was launched in 2006. 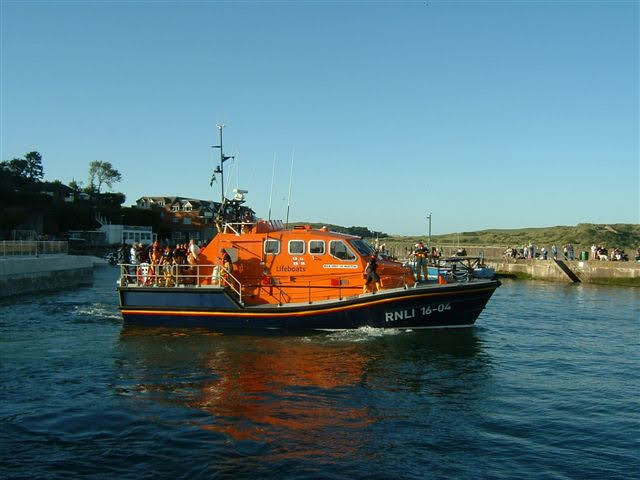 A new station needed to be built to house the Spirit of Padstow. It was built alongside the existing station at Trevose Head. The approximate cost of the new boat station (and new landrover) was £5.5 million.

More details can be found on the RNLI website and wikipedia. 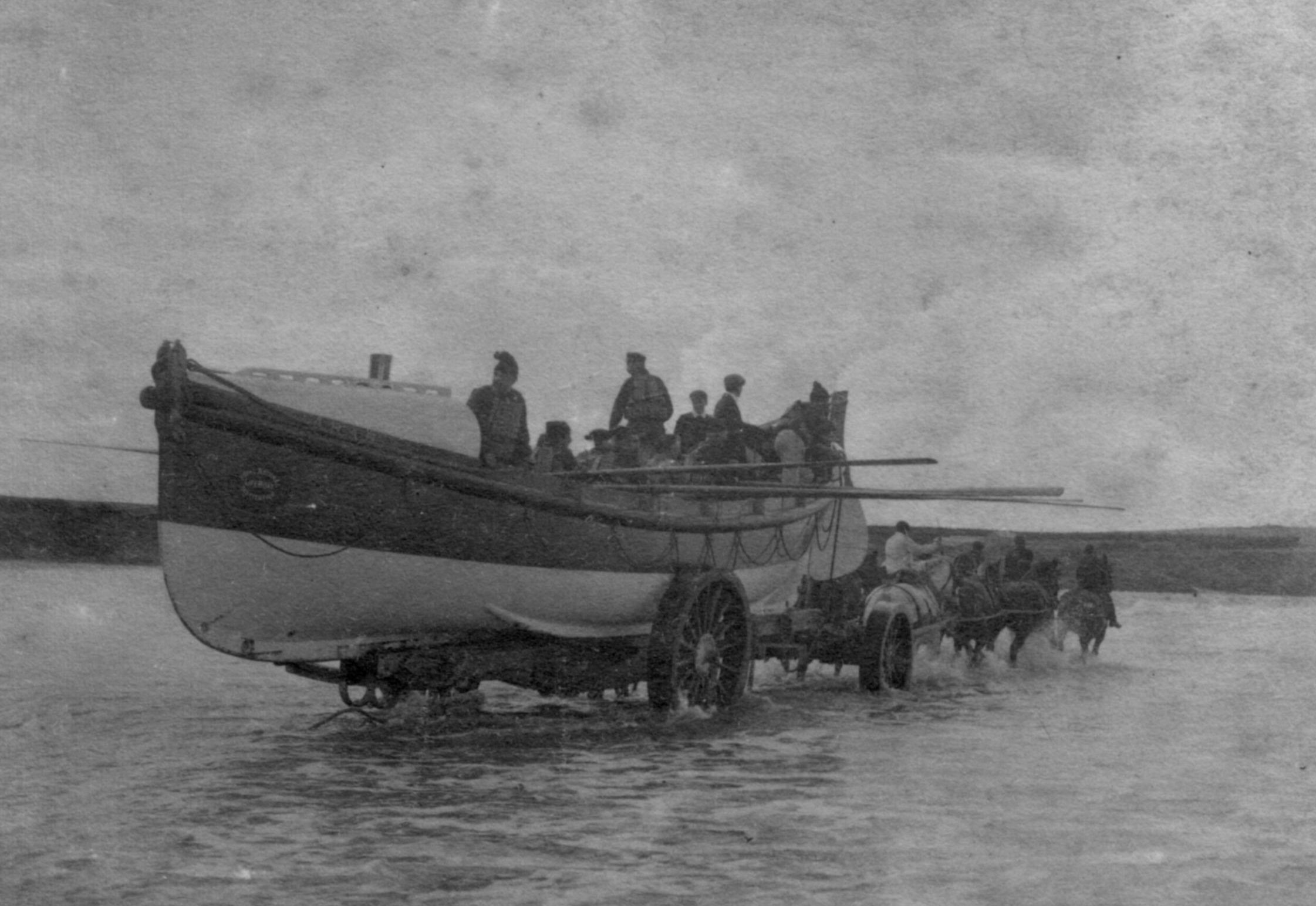 This photograph shows the Arab at Harlyn Bay on her carriage pulled by six horses that would have hauled her from Padstow along the narrow country lanes. 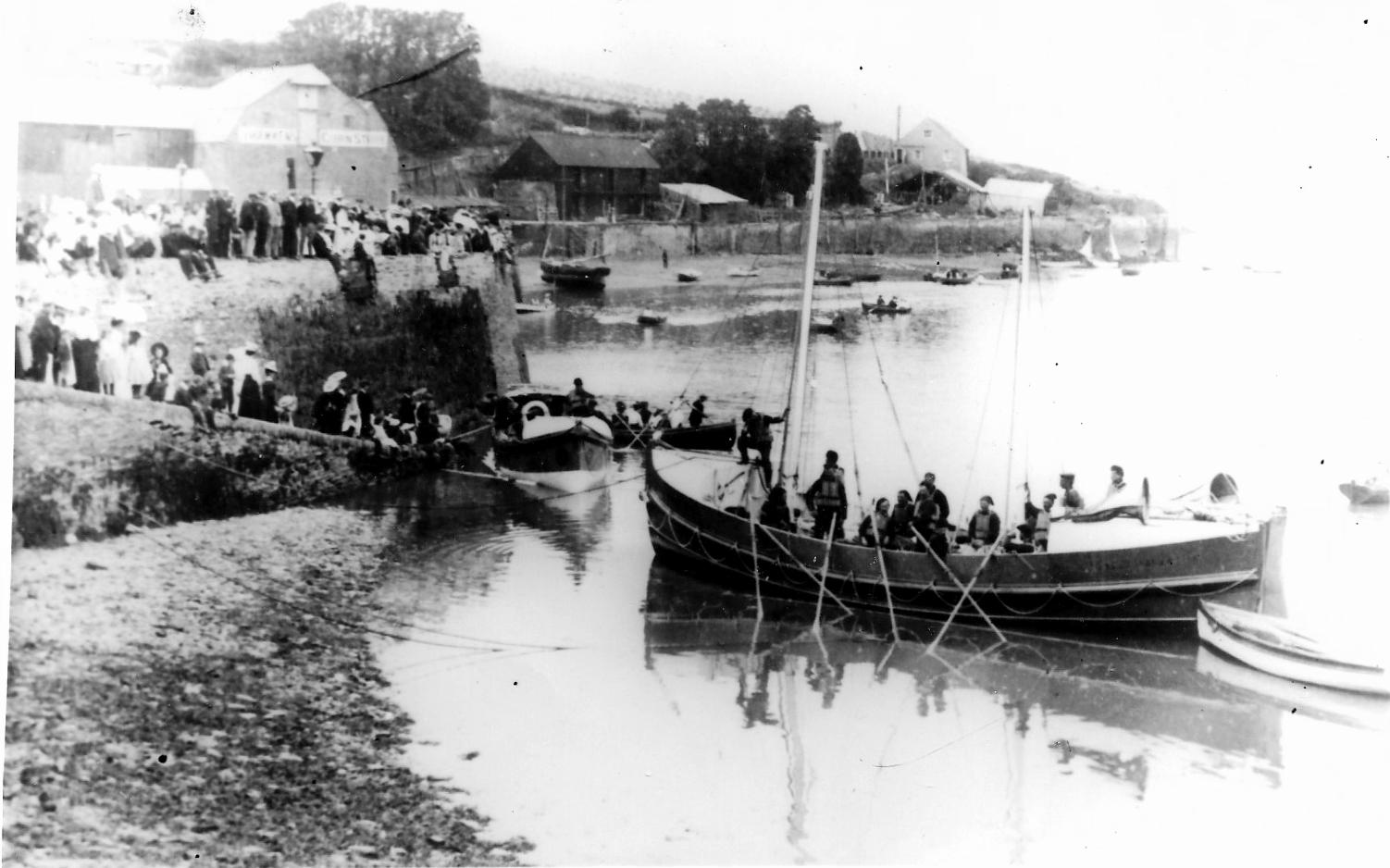 Lifeboat Day was and still is a special occasion in the life of the community.

Crowds stand on the slipway whilst children sit on the wall. Everyone is in their finery for the occasion. Can you pick out the lady with a parasol?  Most people are wearing hats including the children - zoom in for more detail.

J Hawken’s Corn Store is locally known as the ‘Red Brick Building’ because it was constructed using bricks which was rare in Cornwall. As the building was in such a poor condition, the building was pulled down and rebuilt to a similar design in 1991. 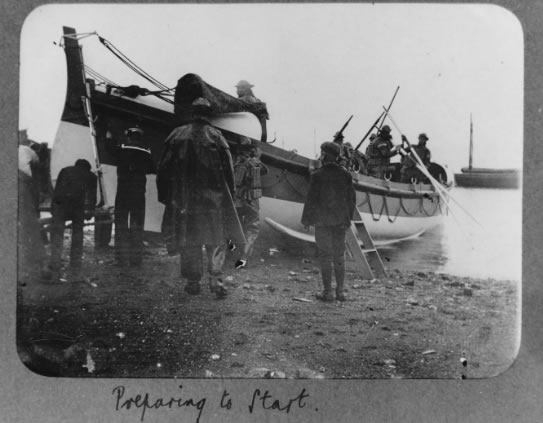 This photograph shows a close up of the lifeboat being prepared for launching.

The cone shape canvas seen on the stern is the drogue used to keep the lifeboat bow up to the swell whilst carrying out a rescue.

The crew are dressed in oilskins, sou’westers and cork lifejackets. Note the ladder used to get aboard the boat.

The young boy watching is wearing knickerbockers and a cap. 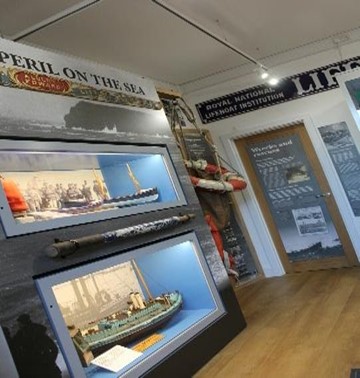 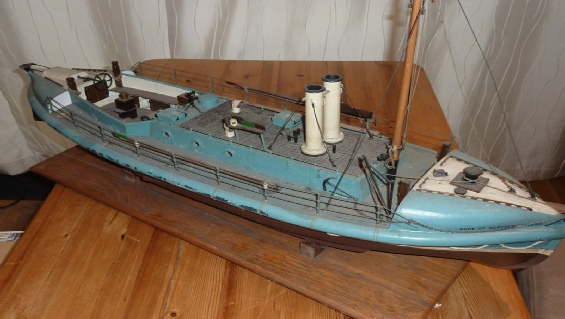 This museum display contains a selection of lifeboat artefacts, including the “Albert & Edward” & a model of the ”Arab” which was lost in the 1900 disaster, along with the steam lifeboat James Stevens No 4.

This outstanding model of the "Duke of Northumberland " is that of a sister ship "James Stevens" No 4 which was sadly lost with all hands in the 1900 disaster off Stepper Point Padstow. This model has recently been placed in our custody by a friend of the museum. It is interesting that this is one of only 3 of this class built and is the only one fitted with water jet, the others used conventional screw propulsion technology.